There is a monthly show at Joe’s Pub called Women of Letters. It’s a literary salon where, according to their website, “women come together on stage to celebrate the lost art of letter-writing.” This past month, I had the opportunity to perform on that stage alongside some of the most incredible women I’ve ever encountered, including Joan Juliet Buck, former editor of French Vogue, and Suzanne “duh-duh-duh-duh, duh-duh-duh-duh” Vega. It was insane.

I’m the giant on the far right.

One of the magical parts of Women of Letters is that they don’t allow recording of any kind during the show. That way they create a safe space where performers can say whatever they like, knowing a video isn’t going to show up on YouTube the next day.

However. If you wanna publish what you wrote, you totally can.

The story I shared wouldn’t have happened without this blog, so even though I wavered a little (I think you’ll see why), I’m posting my letter here to complete the circle.

Women of Letters NYC, April 2017: To the One That Got Away

I know it’s been a while since we talked, but I just can’t stop thinking about that last thing you said to me…

Do you remember that? Just one word. “Heartbroken,” then you left without giving me a chance to find out exactly what you meant.

Of course, I get you were saying you were heartbroken and that I was the one responsible, but which specific heartbreak are we talking about here?

I’m guessing maybe the blog, but can that really be it? I’d apologized so many times. I’d even cried on your belly and begged for forgiveness just the week before. “Please Mommy, we don’t have much time.”

I hadn’t called you Mommy since I was 12.

And all you said back was, “You’ll never know how much you hurt me.” Which still blows me away. I mean, let’s be real. What kind of mother does that? Do you know how hard it is to accept that you literally decided you’d rather die before forgiving me for a few blog posts?

You probably do. And based on the 40 years we had together, my guess is that somewhere you’re high fiving yourself for making the perfect exit.

Okay. I get that it was really fucked up of me to write about your pill addiction online, especially those “From the Cot” posts where I talked about staying in the hospital while you detoxed. But like I told you the night you broke our 2-year silence after your doctor suggested you get your affairs in order … I was scared and I was angry and I was acting out.

I really am sorry I hurt you so much.

At least I took the posts down, right? Granted, it was after you (and the rest of the family) found them, but still. Beyond going back in time, what could I have done?

You remember that Precious Moments doll you got me after I gave the baby up for adoption? It was the angel one I’d been wanting for so long and your note read, “Nothing you could ever do could change the love I have for you.”

You wrote that to me two days after I’d woken you up in the middle of the night to tell you that not only was I pregnant, but that I was also in labor and needed a ride to the hospital RIGHT. NOW.

For the record … I still don’t get how you lived with me that entire time without ever noticing your 19-year-old was with child, but I guess that’s not the point.

The point is, you found out I was having a baby, you watched me have the baby, and then you helped me sign away my rights to that baby all in the span of two days. And still your instinct was to reassure me of your unconditional love.

Nothing I could ever do.

Of course, that was also 1990. At the time, the worst thing you could imagine me doing was killing somebody and even that, you promised, could never overshadow your love for me. It would be a full decade before you could fathom I’d ever have the ability to out your drug problems to our entire family, and the world at large, via a thing called the Internet.

Still, I don’t believe that’s the heartbreak you were talking about when you stared straight at me with that infamous evil eye of yours and forced out the only word you’d said in days. I suppose you didn’t want there to be any question about whether you died at peace because you most certainly did not.

You were heartbroken and I swear to god I believe you purposely chose that as your last word to make sure I never forgot it.

As much as I’d like to think it was the blog that broke your heart, I know it was what happened the day before you died that dropped the final ash in your cremation urn. So, I wanna explain my side.

That day, I’d been home for three weeks, clearing out your belongings as if you were already dead, poring through the piles of garbage you’d hoarded over the years, and cleaning up after your uncared-for menagerie of cats and dogs. At least I had mama cat handling the litter of kittens in the linen closet. It’s terrible to admit but, I was kinda happy when I found the head of the one she ate. And part of me hoped she’d eat more to thin the herd.

On top of all that, the septic tank at the house had gotten so full, we couldn’t wash laundry and flush the toilet at the same time. Otherwise, the tub would start to overflow with 30 years of our family’s shit.

I’ve never related more to an inanimate object in my entire life.

That day—the one before you died—you and I were home alone. You, morphine-d out on a hospital bed in the living room where the sofa used to be, and me in the back of the house sorting through mementos of a life with a mom who’d begun a descent into depression and drug addiction during my teens.

Each plastic bag of clothes to donate, or trash to throw out that I carried past your catatonic body was a symbol of how I’d never have the nurturing mother I’d seen on TV and at my friends’ houses.

I remember the only noises in the room being your respirator and your gurgling from the fluid on your lungs. Then my voice. I haven’t been able to pinpoint what finally made me snap. Maybe I found another junk drawer filled with cheese wrappers, or a fresh pile of dog shit in the hallway. Maybe that was the day I found your unsigned will where you’d made a point to note that you had left me out on purpose.

Whatever it was, all I know is that before I realized the gravity of what was happening, I was standing over your not-quite-dead body unleashing decades of anger and resentment, taking full advantage of the hospice nurse’s comment that even though you couldn’t respond, you could definitely hear what I was saying. She meant it as a warning. I took it as an opportunity.

And I know I took it too far.

In addition to airing every grievance I’d ever had with you, I told you your body was shot this go round, you were never going to recover, and that you should just cross on over and give it another try in your next lifetime. I quoted fucking Poltergeist.

What must it have felt like to hear your daughter tell you to just die already, knowing she 100% meant it, while not being able to respond because you were incapacitated from narcotics and the general business of dying? Of course your last word was heartbroken. What else would it have been?

You know, the crazy thing is, even after weeks of watching your body decay and planning the logistical parts of your death, I still had hope we’d find a way to work things out emotionally, which I didn’t fully understand until you finally died and I knew for sure we were out of chances.

I miss you, Mom. And I so regret that we ran out of time to make things right between us. But. At the same time, I’m so grateful you left when—and how—you did. The truth is, as hard as losing you has been, it’s also given me a chance find myself. I’m a storyteller and performer now and so many of my pieces center around our relationship, how I wish we’d understood each other better while you were here, and how I’d never be the writer or the woman I’ve become if you still were.

Thank you for all of it. 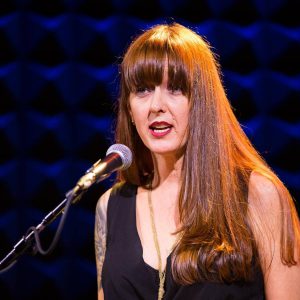 *Seriously. Women of Letters is hands down my all-time favorite storytelling(ish) show. Do yourself a favor … and plan ahead cause this shiz sells out every month – frequently 4 weeks+ in advance. www.womenofletters.nyc/#events

2 thoughts on “My Letter to the One That Got Away”