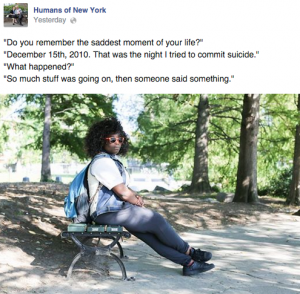 December 15th, 2010 was also one of the saddest moments of my life. Not that specific day exactly, but from 13th through the 29th that year I was home in Georgia with my sister and my niece watching my mother die in a hospital bed in her living room so, really any of those days would qualify as one of my saddest moments.

December 15th, 2010 could have been the day I drove from my hotel at 90 mph through the backwoods of Tift County at 5AM after my sister called to let me know mom had escaped the hospital bed again and she needed me to help lift her off the floor.

Or maybe it was the day when Mom was so comatose we’d only known she was still alive by watching her blood pulse through the veins that stood out from her bony, frail chest – the same day that, when my niece and I ran out to Wal-Mart for a minute, we got the terrifying call from my sister, “Hey, you don’t think Mom’s already dead and it’s just her pacemaker keeping her heart going, do you?”

Maybe, December 15th, 2010 was the day I found myself sobbing in the aisles of Staples after deciding that a Snuggie would be the last Christmas gift I’d ever buy my mom. When I pulled myself together, I went to pay and just as I got to the front of the line, the cashier put up the sign. “Next register, please.”

All I wanted to do was escape with my stupid Snuggie so I could have another breakdown in the car before driving back to Mom’s house. When that sign went up, in that moment, it felt like I’d been sucker punched in my soul.

I felt I held it together pretty well, but I must have sighed or something because as I turned to walk to the back of the line next to me, the woman at the front of it, without even looking at what I had in my little basket, gestured for me to go ahead of her. “Here honey, you can go first.”

“So much stuff was going on, then someone said something.”

I was more broken that day than I’d ever been in my life. And that simple, “Here honey, you can go first,” remains to be one of the most magnanimous gestures I’ve ever experienced.

That woman will never know what she did for me — how she saved my life — that day, just like the person who said something to the girl in this photo may never know how close they came to being the catalyst that made someone take theirs.

“So much stuff was going on …”

You’ve got a choice people. You can either be the person who builds others up or the one who breaks them down. It doesn’t take much on either end. It’s just about which person you want to be.

How about for today you choose to build other people up? If you like it, maybe you can try it tomorrow, too.

2 thoughts on ““…then someone said something.””