It was early 1978 when Simon Peter Nelson brutally murdered his six children with a hunting knife and a rubber mallet. He beat each of his progeny (aged 12-3) in their sleep before stabbing them to death. (Or, at least the ones who didn’t wake up from the ruckus caused by their siblings’ grisly demise. Nelson claims that they were all asleep when he began their individual attacks, but I just can’t fathom the possibility.)

The intended victim was Nelson’s wife Ann, whose attorney had called Peter that day to notify him that she was filing for divorce. In his rage over the breakup, he decided the best way to get her back was by killing their kids and their dog Pretzel who got the least of it, dying from a single slash to the throat.

Reports detailed Nelson said he “snapped” just like the people on that show on Oxygen. This particular snap lasted long enough for him to violently beat and stab his 6 children in multiple bedrooms of their Rockford, Illinois family home along with the Schnauzer. (My guess is that Charlie the cat, being a cat, probably peaced the fuck out when he saw what was going down, which is why he remained the only survivor in the house.)

After the slaughter, Nelson’s snap continued for an additional 2-hour drive across state lines to the Ramada Inn in Milwaukee, Wisconsin, where Ann was staying. After hotel security were notified of a disturbance, they contacted the Milwaukee police who found Peter beating Ann in her bathroom.

After he was apprehended, Ann told the cops that Peter said he killed their kids. A phone call to Rockford PD and a subsequent break in at the Nelson house quickly confirmed his claim, and his domestic abuse allegations were soon joined by 6 charges of murder. 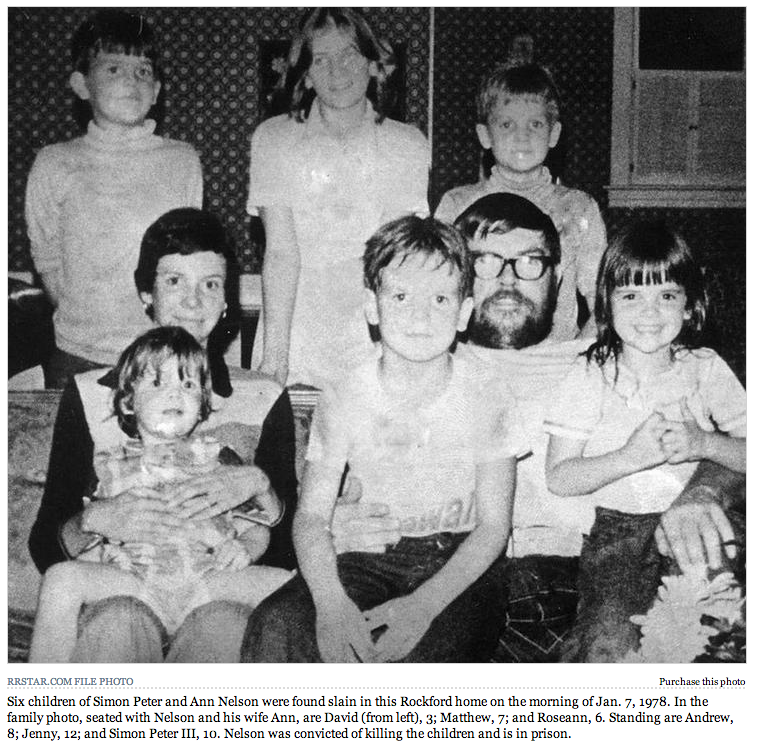 The case got national media coverage for weeks and like a ton of other children at the time, I was an innocent bystander who got caught in the emotional crossfire of this hideous event. Because until I saw a report on the Nelson story on television, the concept of a parent killing his child wasn’t anywhere on my radar. Once it was, I couldn’t stop thinking about it. What was life like for those kids? What was it like waking up to your parent beating and stabbing you to death? Did any of them have an inclination or any warning of what might go down after they went to bed that night?

When I crawled into my own bed after seeing the report, I worried in my  sheets for what felt like hours before I finally got the nerve to get up and ask Mom about my newfound fears.

“Susan, what are you doing out of bed? You should be asleep by now.”

“What are you scared of?” she asked.

I paused for another second, took a deep breath and  just blurted it out. “How do I know you’re not the kind of mommy who’s going to kill me while I’m asleep?”

She gave me an exasperated look and replied, “Well, Susan. How am I supposed to know you’re the not the kind of daughter who’s going to kill me while I’m asleep?”

When Mom responded to my biggest fear by questioning my own intentions, I got my first lesson in knowing there are no guarantees in life. And Mom apparently got her first inkling that I might kill her. So, instead of pressing the issue, I just went back to bed.

I was 7 and a half at the time and from that point on, the trust mom and I had in each other was a thinly veiled hope for the best.

23 thoughts on “My First Life Lesson”